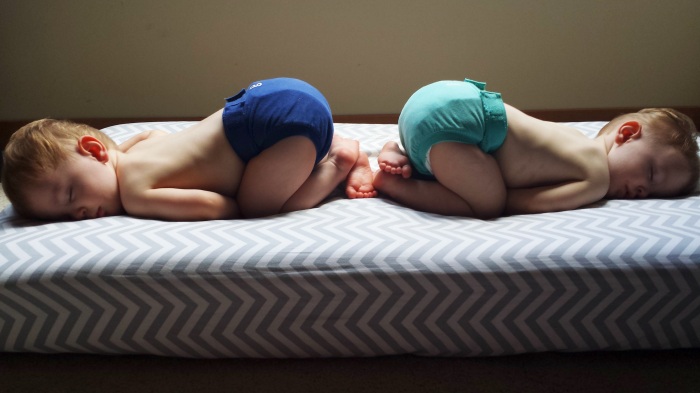 The one piece of advice anyone with twins agrees on is….GET THEM ON A SCHEDULE!! They both feed, nap and wake at the same times every day. As they grow you have to adjust the schedule with the needs of both children rolled into one daily routine. yea…its an art…
why have a routine
well try it without one and get back to me 😉 its chaos, and I can not stress that enough, CHAOS…as new parents the schedule of one baby can be baffling enough on an “on demand” feeding routine let alone two on opposite routines. Scott and I were lucky enough to only experience this twice, once while they were in the NICU, and once shortly after they came home. *Plus a schedule is an easy way to track baby vitals (potty times, who did what, feed times, etc.)…think about trying to remember which baby you changed last and who peed… at 3am.
from day one have a routine
Whether you are coming home from the NICU one at a time or all leaving the hospital at the same time have a plan for your daily schedule and stick to it! When we left the NICU the staff had already established a “feed-every-three-hours” routine. We followed this for 4 days and then they immediately jumped up to every 4.5 hour feeds.

keeping them on the same schedule can be tricky
It means making tons of judgment calls throughout the day on waking a child once the other is up, feeding both when only one is hungry, keeping two tired babies up to avoid breaking the routine. It also means tight scheduling or not doing some activities to avoid breaking the routine. We did wait quite a while to begin doing outings with the boys for this reason.
adjusting the schedule
As your kids grow their needs change and you will have to adjust to them. Each child is different but ours have always done best with a “slow change.” So when we went from a bottle to dinner with milk we slowly reduced the amount of the night time bottle, while increasing the amount of “solids.” That being said, the boys from day one have been very sensitive to time discrepancies in the schedule and we have struggled on occasion to maintain sanity sometimes. No this doesn’t mean you don’t have to stick to the routine all the time, a day here or there will throw them off a bit but its manageable. So just make sure to plan any big events(that will be all day affairs) in advance and block out the days around them.
As they get a little older (12m+) outings get a little easier, they can walk, they require less “baggage” and once ours passed a year we moved to one nap a day so we only had to plan around that:)