In my short time gardening I have found I do not have that much of a green thumb. But, Im a little too stubborn to give up on growing my own food. So, while I won’t attempt seedlings again(without a grow light)I will plant what seeds we have left in these DIY garden beds!!
After almost 2 months of planning (and changing our plans numerous times) last we set into action! A family member was nice enough to share her book on raised beds and we adapted our design to be similar.
What you’ll need to make one raised 4×4 garden bed:

From the inside of the garden bed frame screw the PVC (1inch dia. x 5 inches long) into the 4x4s on each corner. Make sure to only screw at the bottom, leaving space to insert the 1/2 PVC for the arch.

The pvc arches over top to be able to cover the beds for critter control will most likely be a necessity in an area like ours. 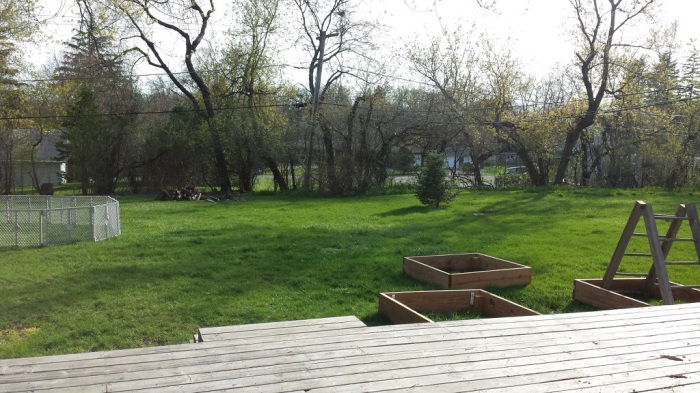 As you can see we have placed the old monkey bars in the bed and are planning to bury them in for stability. And the jury’s still out on how to secure them together:)

We did transplant the grass to cover the old horse shoe pits we ripped up last weekend.

Instead of the suggested weed cloth we are trying old cardboard since we had huge chunks from the swing set boxes! We dug in just enough to remove the grass and level the beds.

After filling it with a layer of compost, vermiculite and peat moss we are ready to go!!….now I just have to dig up 2 more and fill those…..ughhh….at least it’s a work out…did I mention it was 85 degrees today :0