It has been FOREVA since we have had any family pictures, that is…with all 4 family members in the shot not doing something strange. Needless to say we hoped to get a few nice ones of all of us. Thus began our photographer search…well, that was 2013, I was hard pressed to find someone with my style on a realistic budget. And by realistic budget I only mean that I didn’t have to foot their studio rent that month. But…..late in 2014 a friend forwarded information for silva photography timing was perfect and we immediately set up a session for mid January. We wanted the feel of the third ward in MKE but there was an art show the day of our shoot. The photographer suggested cedarburg and that was perfect. We have some beautiful shots, I just had hoped we’d get them back on time. Anyhow, take a look! 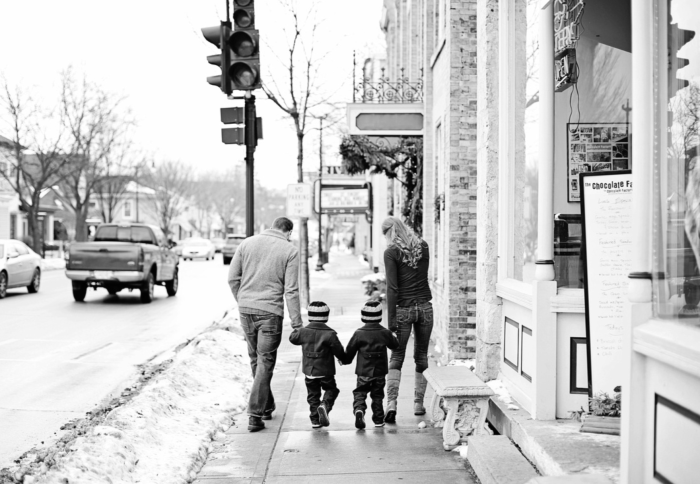 ~all pictures taken by silva photography~

After a few days of trying to rearrange the schedule we are finally on track. Daily life, even as simple as what time to have lunch, is now chaotic. With twins some days everything seems chaotic though….BUT, were on target and were even getting a 3 hour nap in! Amazing, its given Scott and I plenty of time to pack, a luxury I didn’t have the last few times. Anyhow, we have been trying to occupy the boys when we do have to pack with them around so we ordered a play table…not just any play table a splash play table. Our little “merman” babies (think zoolander) love to stay in the tub for hours everyday splashing away and recently have found a second love in our pool. We decided to put it on the porch, which, we recently covered in bamboo grass to add a little privacy since the boys are frequently nakie :0 And…they LOVE it, every time they play by the glass patio now they try to open the door to get out there!

So, MOVING TIP # 1 pack the things you don’t use on a daily basis early (2-4 weeks before you move depending on how much stuff you have) this will save you time in the long run. Be sure to clearly mark all boxes with contents and instructions on where they should be put. This way you pack early (less stress) and can throw away/sell things you wont move with. An added plus…the pets and kids aren’t alarmed by the slow process:)

So after a lot of dreary weather around the Madison area we haven’t gotten out in what seems like weeks. But, as were waiting for the weather to pick up a bit I’ll fill ya in on our most recent activity, The Shedd Aquarium! We went on a Monday morning foolishly thinking that it would be slow….its Chicago, it’s never “slow”….that being said we kinda set ourselves up badly. The Sunday before my mom & stepdad were nice enough to take to boys so that we could have a day and night off (SRSLY YAY!!) but this meant I had to drive back to Milwaukee at 4am on Monday to get the boys before my parents had to leave for work, yes you read that right 4am! And of course, when we got to Milwaukee Scott accidentally woke the boys, so while he napped I showered got myself and the boys ready and packed up the car. We got on the road to Chicago at about 9 and got to The Shedd at 11ish.

So after waiting in line in the baking sun we got the “pass” rather than doing general admission because it included a Sting Ray touching exhibit! I think I was more excited about this than the boys and Scott combined. Anyway, I talked Scott into doing that before the boys were too tired and cranky. We made our way to the opposite end of the museum and finally saw the sting ray pools a huge kidney bean shaped pool with a trickling three tiered rock waterfall on one end. And with… get this….less than 15 people around it!! So, no getting elbowed out by other peoples kids or pictures with creepy strangers. B went first…and he LOVED it! Stuck his hand right in and even got to touch a few Rays! Aedon on the other hand was less than amused. He was instantly uncomfortable on his stomach and almost started crying (this coming from the kid who constantly says “go” and loves exploring, he must have been sooooo tired). Scott and I let them nap as we finished touring, he said he liked the penguins best, but I think the Rays were the highlight by far!!

So I thought I’d do throwback Thursdays to catch people up on our twin journey! We will start from the beginning and every Thursday I will add more to the story. So, starting from the moment we found out we were having TWO!!

I had been putting off going into have my first ultrasound done, I really wanted to push it back, mainly because the closer it was to 16 weeks the better I thought our chances were to find out gender… plus it had to be a time that Scott was available. We were sent to a hospital in Janesville and by the time we went I was 13 weeks and 1 day (the nurses at the hospital said I couldn’t wait anymore). After filling out the tedious insurance paperwork and what now seems like a very surreal moment to me; sitting in the waiting area of the radiology department, oblivious to the bombshell that would be dropped in 5 minutes. The Tech called our name, we followed her down the tan corridor, my bladder bursting she took one look at my stance and said wait until after it, is easier to get a good view. I settled in on the exam table and glanced up at the screen as she placed the wand on my stomach. A Blur of white and she pulled the wand back, I looked at Scott, taken aback by the amount of white on that screen.
I thought most ultrasound images were black….
She put the wand back angling it a little differently and showing perfectly clear two white blobs.
Turning back to look at us with the announcement of “TWINS!” she didn’t even get the word out of her mouth when I said “OHHH SHITTT” my eyes locking onto Scotts. My dreams had literally come true, more than 2 months earlier I had asked Scott what he thought of having twins. His abrupt “No” ended that conversation before it even began, but that never stopped my twin dreams.
The tech scanned and scanned calling on another doctor to make sure they didn’t need more images; she asked if we wanted to know gender guesses (of COURSE we did!! I was really hoping for B/G) well…next shocker… she guessed they were MoMo Boys.

After many…MANY months of debating if I even had time to blog I can safely safe…maybe. I am finally done with my Bachelors, well 10 days left, not that I’m counting or anything. Also, I have Scott at home for now, which is wonderful! And its just in time too, this summer I made plans to get out with my Mini Men, to explore some local attractions before we make our big move. Outings with the boys are rarely dull, and our bright red city select double may as well be a neon…most days I don’t mind the questions, honest :0 hopefully I will be able to clear the air on what life with Identical twin boys is really like….this is our journey……